Could this be a mysterious floating city that was “seen by hundreds of people across the globe?”

An alien chaser claims to have spotted a mysterious object of several miles in length that is orbiting Earth in a NASA live stream from the International Space Station (ISS).And he claims the US space agency cut the feed once it came into view.A year ago we reported how huge numbers of people in China claimed to see a mysterious cityscape floating in the skies above.Thousands reportedly saw a ghostly alien city floating over Foshan in the Guangdong province of China.Then, a few days later people in the province of Jiangxi, China, also reported seeing a similar cloud city.

An alleged video recording of the event went viral online before details of similar sightings in other parts of the globe emerged. 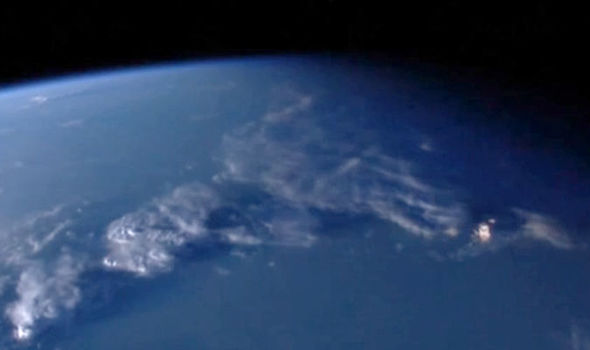 The massive anomaly captured by the NASA live feed.

Now YouTube user Streetcap1, who posts details of alleged UFOs and paranormal activity, has released a video showing what he says is a massive object in Earth’s orbit, which is possibly hundreds of miles long, captured on camera yesterday.The footage was taken from a new NASA camera on the ISS called the high-definition Earth viewing experiment.His video has begged the question of whether it could be the mysterious floating city some believe becomes visible through a portal from another dimension.In a video entitled “MASSIVE Golden UFO Orbiting EARTH” about the new “discovery” Streetcap1 shows a bright object above the Earth, as seen above, and poses the question: “What is it? It is 200 miles away.”To eerie music the video shows the cut in feed by NASA, who said: “The high-definition Earth viewing experiment is either switching cameras or we are experiencing a temporary loss of power with the ISS.”

In a promotional video blurb, Streetcap1 said: “I thought I was seeing things at first then quickly started recording. To my surprise they cut transmission – attempt at a joke – anyway this has to be huge whatever it is. If it were a building it would be hundreds of miles long.”

Viewers of his channel were impressed and one speculated if it could be “alien related”.

One posted: “They are here! I wonder when they are going to make their great entrance on a major city, and the people’s reaction.”

Another called added: “There IS something there and its very odd.”

But many people believe the alleged object is nothing more than a reflection from the Sun.

These include Scott Brando, a UFO hoax investigator, who runs ufoofinterest.org.

He told Express Newspaper: “I think is a reflection of sunlight through clouds.”

He pointed to an explanation he gave to a similar alleged sighting following a similar effect.

In fact, most people believe the original city in the sky event was also an optical illusion known as fata morgana which can lead to objects such as boats or buildings appearing to be disembodied from the surface of Earth.

NASA last month also spoke for the first time about why its live feeds occasionally lose power, following a string of “false” claims it was covering up UFO encounters with the ISS.